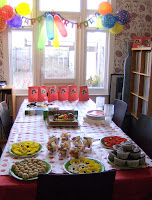 FROM SIMONE – I was probably one of the fussiest eaters ever. My epilepsy, of the fainting type, made sure I was unconscious most of the day, so I had no time to eat, my multiple food sensitivities meant I vomited several times a day and I grew up seeing food as something that made me ill and avoided and dreaded meal times at all cost. I was always underweight and during puberty I started having psychological problems because I did not develop into adulthood at the same pace as my peers. Later on my early twenties as I came to live in Britain I slowly developed a passion for eating and fell in love with food and because of my son’s autism I fell in love for healthy eating and experimenting with flavours to marry the concept of healthy and tasty.

During my troubled years the ingredient that was missing was love. Not love from my Parents, who loved me unconditionally, but my own love for eating and for food. I saw food as an obligation. My Mother fell into a cycle of because I didn’t like anything she would stick to the same one or two dishes I would eat, just so that I ate, I never mentioned I was bored of the food because it never occurred to me, she always cooked the same thing and I always thought that was the way it was supposed to be, until I came to Britain.

All of a sudden I was faced with a supermarket full of different colours, textures, smells that were very appealing to my high functioning artistic mind, cookery Programmes on TV with young trendy chefs, colourful magazines. The habit of eating I didn’t like was suddenly presented to me through my motivation, colours, textures, combining ingredients, when I saw cooking as a form of art I started to enjoy doing it, at first for my flatmates, and then later I started eating and I liked it!

My son happened to be the opposite, he will eat anything, even non-foods, his latest venture, superglue, sent us to hospital, but thank God it was a milder non-toxic type. He loves his food, but I can totally understand when Parents get really distressed that their children won’t eat. I think the key here is using the same technique we use in the Son-Rise Program for inspiring our children to learn anything, using their motivation.

Be a happy detective, what is your child interested in? Brainstorm ways to bring food into the playroom in a fun way, insist, even if they won’t try it, bring it to the playroom and eat it yourself, show them how delicious they are. I ate several plates of salad for months in the playroom before my son would try it, nowadays he eats salad leaves with no dressing, on their own, as a snack, so is the power of persistence. Note however that persistence doesn’t mean forcing your child to eat, it means insisting in showing them there’s variety, there’s plenty to choose from and food is fun.

here are some recipes from our Specific Carbohydrate diet that is suitable for a gluten/casein free diet too:

Meatballs (These are excellent for hiding vegetables)

Mix all the ingredients into a pliable dough and roll into little balls, arrange them in a big oven dish, drizzle some olive oil over them and cook in a pre-heated oven at 180oC for 30 mins. When they cool down you can freeze them and warm them up from frozen at the same temperature for 15 mins so you always have some handy for those hungry times or as a travel snack.

Sprinkle the ginger, dill, salt and pepper over the salmon steaks and steam them or boil them for 12-15 mins. Flake them with a fork or your hands in a bowl, discarding the skin, and mix with the other ingredients and more salt and pepper to taste. If the dough is too soft (it will depend on the type of vegetables and size of egg you use) add more flour or ground almonds until it is of a pliable consistency and shape it into little burger shapes. Shallow fry batches of up to 6 cakes in a bit of olive oil under medium heat until brown on both sides turning them over once. They are delicious served with salad.

1 cup of nut butter of your choice (I use almond, cashew nut or hazelnut
1/2 cup of honey
1 egg
1/2 tsp of bicarbonate soda (For the GAPS version of the SCD you can leave it out it will just be less fluffy and a bit flatter but it doesn’t alter the taste)

Whatever you cook, love your food and your child will be inspired by your love.