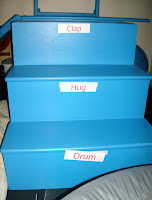 FROM SIMONE – My son loves going up and down staircases so I came up with this game to use his motivation.

I printed, cut and laminated strips with actions written on them. The writing in red colour of minimum 3″ in size is on purpose to stimulate the side of the brain which deals with language and reading. Then I placed velcro at the back of the cards and on his climbing frame steps.

The challenge I am working on here is for him to follow physical requests creating a back and forth communication principle which he lacks and is one of the main barriers to him acquiring speech.

Children who can pronounce words quite clearly but won’t speak sometimes is simply because they see no need for it or find it really hard to grasp the cause and consequence principle, to connect that he does something, something happens, he says something, people give him what he wants.

When we talk about memory we think of the ability to remember things, people’s faces, birthdays, places we’ve been, but there’s also another type of memory, kinesthetic memory.

Kinesthetic memory is the ability of the body to remember the position of the joints, muscle, etc to perform an action, even talking which takes so many facial muscles. If the child has also low muscle tone, a delayed readiness of the muscle to respond, then they will also have difficulty in their kinesthetic memory. It makes it harder for you to remember how to do things, to multi-task, in which sequence to do things, to count how many things you’ve done or when you did them or even if you did them. As a very young child I had such serious muscle tone and kinesthetic memory disability that I lived terrified thinking I had done something wrong but couldn’t remember it. 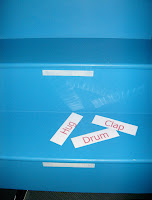 Back to our game, by using the fact that my son already likes going up and down stairs probably because he can exercise his kinesthetic memory, I joined that repetitive action with a cause consequence outcome which is also a motivation for him, tickles, hugs, kisses, drumming, etc

So when he goes on each step I get to do the fun action to show him he is causing that action, I also model the words associating each word with the card. When he is used to what happens I request for him to go to different steps so that he gets to fulfill successfully a physical request that is easy for him, which boosts his confidence. Sometimes we are so keen in requesting from our children what we know is challenging for them that we forget sometimes it is a real confidence boost to sometimes request from them what is easy too so that they can experience more success, specially when you are leading with a “give-upper”

You can have fun changing the cards and creating new fun actions as much as you want.

Hope the idea is useful to you