Recovery From Autism IS Possible

Recovery From Autism IS Possible 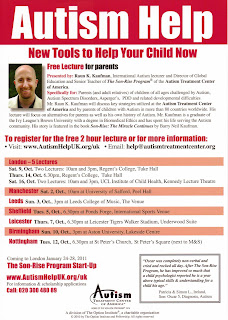 From Alison: Raun K. Kaufman will be arriving in the UK to commence his lecture tour in under two weeks from now. His lecture has brought a message of hope to thousands of families who have heard him talk.
In 2003, I was one of those parents who arrived for the lecture. At the time I had been working in a playgroup supporting a child with autism as well as bringing up my son who had a diagnosis of very significant autism. I had trained in the PECS, TEACCH and Portage approaches to dealing with autism, so I had been told by those who diagnosed my son as well as those who did my training that autism was incurable. So to say that I was a little skeptical would be an understatement. I was also pretty desperate at the time because in spite of all my training, my son was really struggling.

What I saw in the lecture when Raun started to speak just blew me away. Raun started to explain why autistic children do the things they did – it made total sense to me. But the biggest piece of it was that for the first time somebody spoke about my child with love, respect and hope. For the first time someone was not writing him off and telling me what he wouldn’t do, but offering me ways to help him be the bright shining star that I knew he was.

But what was obvious to me too was here, stood in front of me, was a man who used to be autistic, but was NOW TOTALLY RECOVERED. Raun was funny, spontaneous, knowledgeable and interactive with his audience. That two hours totally changed my belief in what was possible for my child and set me on a new path that has been miraculous for us both.

If you are thinking of going to the lectures then please book your ticket at www.AutismHelpUK.org/uk