Throw Away Your Television?? – Episode 1

Throw Away Your Television?? – Episode 1

FROM CAROLINA: Yes, “Throw Away Your Television” happens to be a song by the Red Hot Chili Peppers – but no, this is not a blog about current pop culture. And yes, it is funny to imagine your garbage bin out at the curb with your television peeking out the top – and no, it probably won’t fit very well. But yes – I am serious. Throwing away our television was the best thing my mother ever did for me.

I discovered at a very early age that my family was just a little bit different. When my friends were munching on turkey sandwiches with processed cheese on white bread, I was eating organic cheddar cheese with alfalfa sprouts and pickles on whole grain bread – the kind of bread that looks more like trail mix than bread. My friends ate fruit roll-ups – I ate fruit leather. My friends had cookies – I had “nutrition nuggets” – our affectionate nickname for the cookie-like lumps my dad made out of whole-wheat flour, nuts, raisins and whatever else he could find in our sugar-free, additive-free kitchen cupboards.  And that was just the beginning of what made me stand out from my friends at the lunch table…

While my friends were talking about their favorite cartoons, or swooning over the latest TV heart-throb, my sister and I could never figure out what they were talking about. We were raised entirely without television – to the point that we didn’t even have a television in the house for watching occasional movies. I still remember how once every few months, we’d go down to our local video store and rent a movie (taking forever to choose something that the whole family would enjoy), and then, while my sister and I happily carried the video to the car, my parents lugged the bulky, brown, rented TV and VCR (circa 1975) behind us.

Looking back, I’ve realized that what really made us different was how much more time we spent living our lives instead of watching others live make-believe lives on television. We played in our tree fort in the backyard – we choreographed dance performances and forced our parents to buy tickets to our shows – we buried treasure in the backyard and made maps to find it again the next day (and only once couldn’t find where we put it…)…  We EXPERIENCED life in a way that our friends simply didn’t.

Don’t get me wrong – I absolutely love a good TV show – there was something wonderful about curling up on the couch to catch up with Friends when I was in college. And yes, there were many years that I resented my mother for keeping me from my cartoons. But I’ve come to realize that my mom is one of the wisest women I have ever known. She had it figured out – and she helped our brains develop a healthy dose of curiosity by teaching us to explore our world rather than watch it flash on a screen in front of us.

Our Son-Rise Program children with autism or related challenges need extra support to learn how to socialize with people.  Natural exploration of social relationships with other people (NOT through the television) is one of the best ways for our children to develop their brains toward more social interaction. 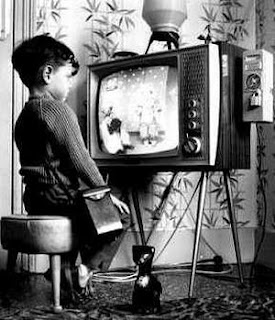 Some of you may not yet be ready to part with your television – thus, Episodes 2 and 3 of this blog will soon follow. For now, let this seed be planted in your brain – the average American watches more than 4 hours of TV each day (not counting computers, video games and texting on cell phones). This adds up to 2 months of sitting in front of the television each year – and if this person lives to be 65, he/she will have spent 9 years of life glued to the television.

Is the trash can looking more appealing now?