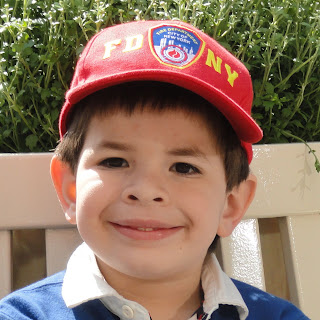 This is Mati – What a Cutie Pie!
Mati is a chatty and lively 5 year old with autism. I met him and his wonderful parents Carlos and Patricia in July in Argentina, when I was lucky enough to visit their home and do a Son-Rise Program outreach.

During the outreach I got to watch Carols, Patricia and some members of their team play with Mati and give them some pointers on how to increase Mati’s social interaction.One thing that stood out about their program is the dedication and love they have for their son, and their creative powers of thinking up and creating interesting and fun games to inspire Mati to want to interact with them. I also got to play with Mati myself.

Mati has many things that he loves to play and chat about. He loves to talk about things in the supermarket, escalators, trains and train stations are a particular passion of his. He also loves drama and is quite the opera buff especially liking Don Giovanni, and has a great singing voice himself. He can be very thoughtful, he asked me whether I spoke Italian, as he can speak a little himself he was trying to find a language that we had in common-how amazing is that!.

We talked during the outreach about The Son-Rise Program technique of joining, and how to know when Mati was being exclusive. During my session with him I was able to demonstrate this by joining in with his escalator ism. He would line up legos and talk about how big and long and how many steps the escalator had. I joined him by creating my own escalator and talking about how long and big mine was. After 15 minutes or more of joining him he stopped looked at me and asked me if we liked escalators at Options. (He was calling The Autism Treatment Center of America, “Options”.) I liked to think that he asked this question because I had been joining in with him with such sincere delight in escalators, that he had the experience of playing with someone who liked escalators as much as he did- making me easier to relate to. Of course I let him know that if he came to the Autism treatment Center of America he would find a whole bunch of people who would love to play his escalator game with him.

Thank you Carlos, Patricia and Mati for a beautiful day.
Keep up the amazing work you are doing with Mati.